History of the Market Street Church

History of the Market Street church of Christ

The Athens (Market Street) church began meeting in 1884 when A.C Henry came and preached in Athens.  For the next ten years, the church met in various locations.  First, they met in the home of David and Eckerberger on the corner of East Market Street and Beaty Street. In 1888, the church met in Robert and Nancy Isom's meat shop on East Market Street.  In 1892, the church moved to the Haggard Photography studio on Jefferson Street on the west side of the square.  The church purchased its first building of its own in September 1893.  The church bought the law office of John J. Turrentine at 314 West Market Street.  The church had 33 members in July 1894.  In 1895, A. C. Henry moved to Athens and became the first evangelist to work full-time with the church.  Within three years of brother Henry moving to Athens, the church had outgrown the law office building, and plans were made to tear the building down and to construct a 40'x60' building with a basement.  The new church building was built in 1901. 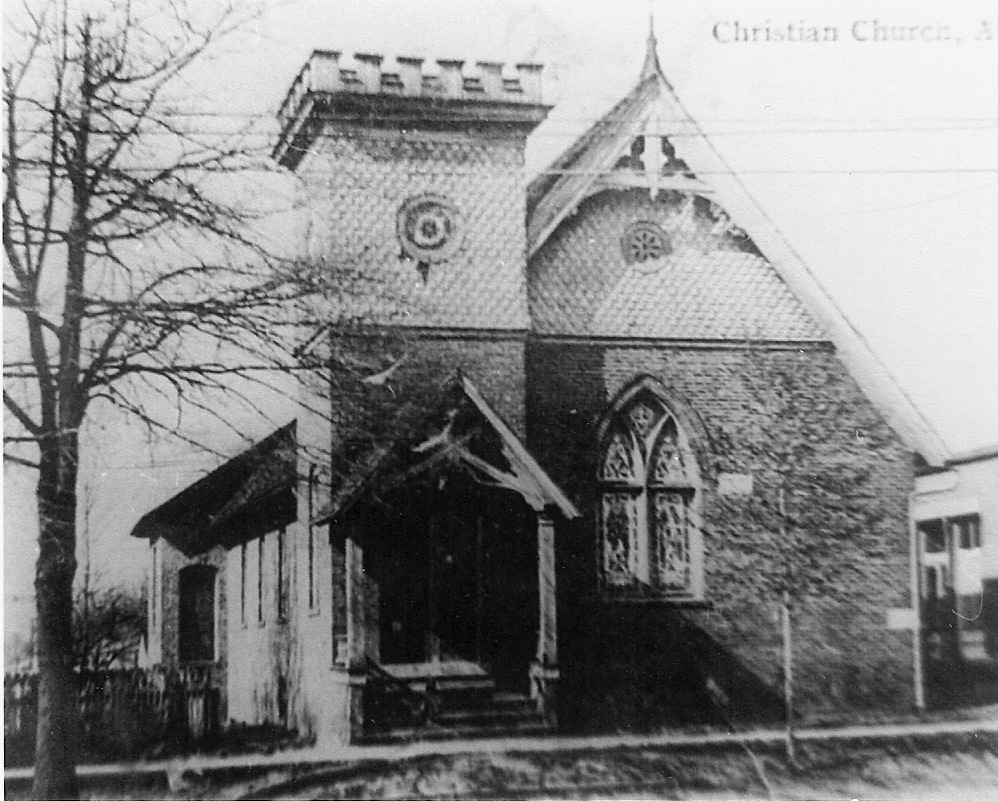 The building built for the church in 1901.

After the building was completed, A. C. Henry moved to Birmingham and William P. Couch moved to work with the Athens church.   The church continued to grow for the next couple of years, but 1903 the division occurred.   The division took place with the church when a piano had been brought in for a wedding and remained in place and was used in services.  The inclusion of the instrument in worship resulted in the formation of two groups.  The group favoring the instrument became known as the Athens Christian Church and those opposing was referred to as the Athens church of Christ.  The years that followed were some tough times for the church of Christ.  During these years, the church primarily met at the Court House until 1919.   During these years, several preachers preached for the group.  In 1908, Thomas L. Weatherford began working with the church, but his sudden death shortened his time.   Later in 1908, Wilburn Derryberry began with the groups for a few years.  In 1909, the church's attendance ranged from 20 to 30. 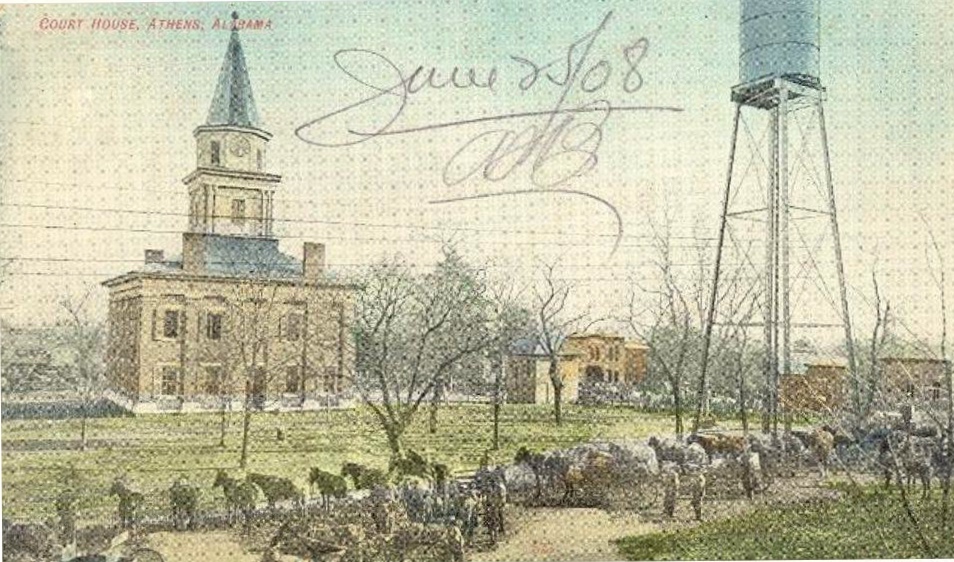 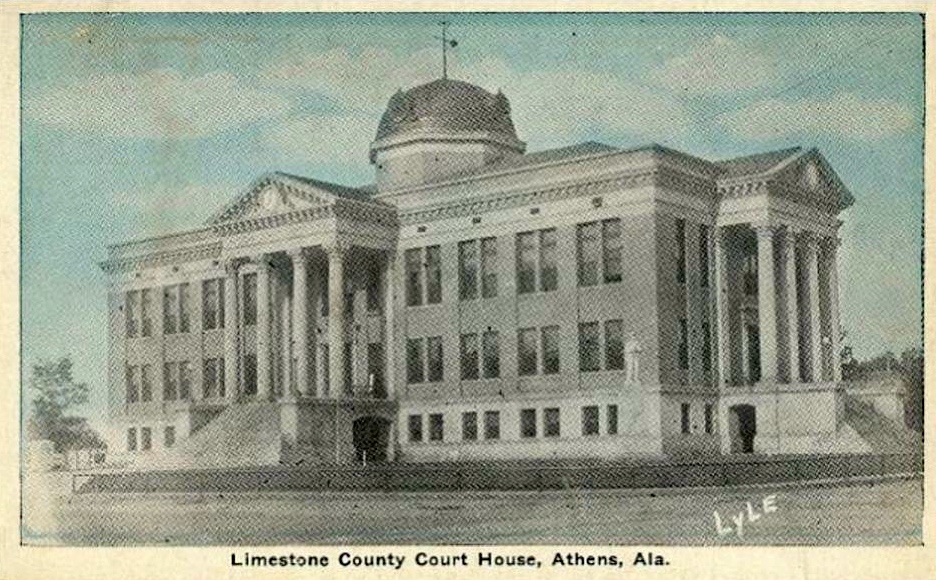 In 1917, J. Petty Ezell was preaching in Albany (Decatur) and he began to come work with the small group meeting at the Court House.  In 1918, L. B. Jones of Paint Rock began helping with the work in Athens.   In 1919, the church had 25 members and was able to obtain the building from the Christian Church, which the small band had met in from 1901 to1903.   In  May of 1920, S. H. Hall came and held a meeting for church.  In the meeting, 7 were baptized, and 20 from the Christian Church left that group took their stand with the church.  J. W. Brents worked with the church from 1920 to 1922.  In September of 1926, M. A Creel began working with the Athens church and continued until 1933.  Eris A. Ritchie moved to Athens in 1934 and continued until 1936.  The continued the growth through the 1930's.  The church averaged 180 and chairs put in the aisles.  In 1935, brother Ritchie reported that 191 were present for Bible study and the building was filled at the worship period.  At this time, the church enlarged the auditorium, added a baptistry, changing rooms, and five classrooms.  The church has overseen by elders since 1919 and in 1936, two more were added along with four deacons.  In 1936, S. H. Hall held a meeting for the church and 21 were baptized and one restored.  In 1936, there were 193 members of the church at Athens.  During these years, the church was engaged in supporting the preaching of the gospel in places beyond Athens and Limestone County.

In September 1937, A.J. Rollings began working with the Athens church.  In the years that followed the church continued to experience much growth.   In 1942, there was an opportunity to begin meeting in a church building on South Clinton Street.  The church was encouraged to start this work.  This work was known as the Sunset church but is now known as the Eastside church.  Also in the early 1940's, the church had an opportunity to become involved the radio work over WMSL in Decatur.  When the radio station began in Athens, they immediately began a program on that station, WJMW (WVNN, today).   It was also during this time (1942) that Irven Lee was supported by Market Street the would preach around the county and on Sunday nights at Market Street.  A. J. Rollings would preach on Sunday morning at Market Street and then throughout the county.  Both brother Lee and brother Rollings would preach 4 to 5 times each Sunday.  The work of brother Rollings and brother Lee continued in this manner until 1947.  In August of 1945, the church again was packed they held a series of meetings in North Athens.  Several people were baptized in this effort, and this began another new work in Athens.  The work in North Athens had started, and the church is now the Northside church. 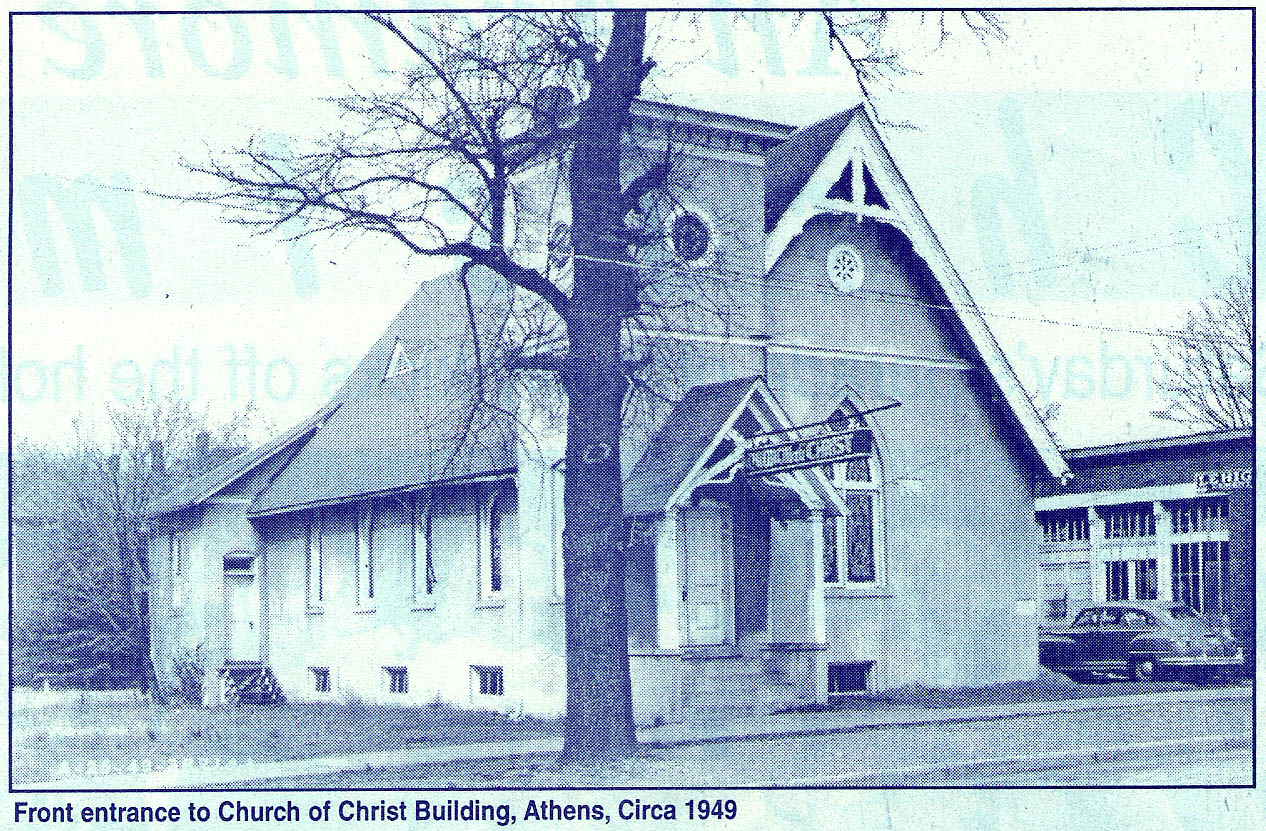 In 1949 the Market Street building was full again and plans were made to purchase the land where the church building currently sits.  A new larger building was built in 1950. In November 1950, R.L. Andrews held a meeting in the new building, and there were six responses to the invitation.  After moving into the new building, the Market Street continued to grow.  In a short time, the building was full.  In 1958, the church added the east wing on to the building for additional Bible classes.  By 1960, the church attendance averaged over 600.  In the latter part 1961, the Market Street church was able to obtain some property on West Hobbs Street.  In 1962, about 200 left to begin the new work on Hobbs Street.

The Market Street building built in 1950 with the east classroom wing which was added in 1958.

In the mid-1990's, there were many Hispanics that were settling in and around Athens.  Some brethren in the area saw a need to teach these newcomers.  In August 1996, Jesus Trevino and Jesus Guerrero held a meeting in the west auditorium for Spanish-speaking people.  As a result of this meeting, a congregation was established, and Market Street provided the meeting place on North Jefferson Street.

In the years that followed the church has been active in preaching the gospel in the Athens area and beyond.  The has held gospel meetings throughout the years, conducted VBS's each summer and the radio work.  The church has supported to preachers in 6 continents.  The church continues to be engaged in the supporting the gospel as they have the opportunity.

Men That Have Served As Elders For Market Street church of Christ:

Men That Have Served The Market Street Church As Deacons:

Those Who Have Served As Evangelists For The Market Street Church: